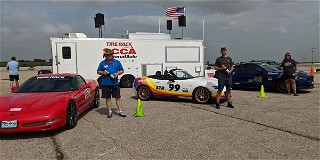 For the third consecutive weekend, competitors flocked to a Tire Rack SCCA ProSolo®, this time in Topeka, KS. Converging on the home of SCCA’s National Office, 132 competitors took to the mirrored courses at Heartland Motorsports Park for two days of competition. Despite the threat of rain throughout the weekend and some lightning delays each morning, the event went off as planned and all drivers got ample views of the course in dry conditions.

Solo Spec Coupe saw a great battle to the finish as the three trophy winners finished out the weekend within 0.4 second of each other. Kinch Reindl led throughout Saturday competition, but failed to improve on Sunday morning, opening the door for a charging Chris Hammond who found 0.135 second on his final run, just enough to slip by Reindl and take the class win by 0.052 second. Mason Herrick was also on the charge Sunday morning, finding a combined 0.744 second over his final four runs. This closed the gap to the lead pair but wasn’t enough to improve out of the third and final trophy position.

In Street Touring Sport, Mark McKnight came into the weekend as the favorite with a 2020 ProSolo win already under his belt. Behind him though, Mike Herrick and James Harnish did their best to take the victory, both finding time on Sunday morning. Harnish’s improvement was enough to give him a comfortable gap over Joshua Pertzsch in fourth but kept him in the third and final trophy. Only 0.206 second ahead, Herrick was taking bites out of McKnight’s lead, but not quite big enough as McKnight held onto the win by 0.205 second.

When a class doesn’t have at least five registered competitors, its drivers are added to the Bump class. In Topeka, the Bump class was 15-drivers deep with representatives from GS, SS, STX, STU and R2. From the first session, event course designer Ron Williams led the group in his G Street Honda Civic Si. Despite a rough start with cones and red lights, Patrick Washburn brought the E Prepared Honda Civic to the front of the field. Partially due to some continued cone troubles, he was only able to climb to second, finishing 0.516 second behind Williams. But that was enough to get just 0.008 second ahead of Brad McCann, also from G Street, in third. The pair of Street Touring Xtreme “Twins” of Chris Levitz and Eric Niemi claimed the final two trophies in fourth and fifth respectively, separated by just 0.020 second.

For the third consecutive ProSolo, the largest class of the weekend was Classic American Muscle, with 32 drivers competing. After a disappointing late loss last weekend in Charlotte, Steve Waters was determined to claim the victory in Topeka. Pulling together by far his best runs on Sunday morning, he took the win by just 0.032 second over Mark Madarash. The margins stayed tight as Scott Steider and J.J. Mallrich both found some time Sunday morning to claim third and fourth positions respectively, separated by just 0.198 second. Another 0.140 second back, Rusty Henderson nabbed the fifth-place trophy. Andrew Chenoweth, Wayne Atkins, W B Sephus and Jeremy Scotton claimed the remaining trophies in sixth through ninth respectively. Finishing just one spot out of the trophies, Greg Paine came out of the gate hot in the CAM Challenge, knocking out trophy winners Mallrich and Scotton in the first two rounds before facing James Darden. Thanks in small part to a red light by Darden, Paine claimed the Top Eliminator honors.

Peru Challenge winner Cindy Duncan and local favorite Laney Blume faced off in a tight battle for top honors in Ladies Class 2. Both drivers found time in every session as Duncan took bites out of Blume’s lead. With incredibly fast final runs from both drivers, Blume held onto the class win with Duncan 0.175 second back. Kelsey Karanges claimed the third and final trophy. When the Ladies Challenge came, a red light knocked Blume out of contention after claiming Top Qualifier honors, and it was Duncan who worked her way through the ranks to take the Ladies Challenge win.

After winning Street Touring Roadster by a commanding 1.405 seconds, Daniel McCelvey was unstoppable in the Super Challenge. Starting the contest with the Top Qualifier honors, he faced strong competitors from a wide variety of classes before facing Brian Tefft Jr. from E Street in the final round. The close battle ended prematurely with a red light on the second runs for Tefft, allowing McCelvey to cruise through the final step of the Challenge. In the third-place runoff, Kevin Wenzel from A Street took down Kinch Reindl from SSC.

With a free entry on the line, the final round of the Bonus Challenge came down to Brian Haynes from B Street and James King from A Street. After a pair of runs, it was King who took the honors and a free entry for a future event of his choosing.

The Tire Rack SCCA ProSolo season continues this week, July 1-3, from Bristol Motor Speedway in Bristol, TN. More information about this event and the 2020 ProSolo season can be found here.